We at Unite Oregon know that justice is a journey, and our work to create an intercultural movement for justice is what sustains us on that journey. Your individual donations will support our work, and allow us to explore new and effective ways to fight for racial equality in Oregon. Help us support our work by clicking here. Even $5 will help.

The Unite Oregon family has grown and we've welcomed several new staff this summer. Please join me in welcoming Khanh Le, our Development Director and Sushma Raghavan, our Field Director. Khanh was most recently the Executive Director of the Main Street Alliance and Sushma comes to us from the labor movement. They will be working together to continue to strengthen our organizing capacity and build power for our communities.

Our BUILD team is also growing and this year we’re adding to our staff for the 2018-19 school year. We’ve hired two BUILD parents part-time to serve families in the Jefferson and Madison school communities. Robert McDonald will serve as a BUILD Parent Organizer at Jefferson High School supporting parent engagement and Leticia England will support lead BUILD Parent Organizer Khanh Le in Madison High School with advocacy and programming.

Civic Engagement: Oregonians United Against Profiling- Vote NO on Measure 105!

Hundreds of volunteers turned out last month for the Oregonians United Against Profiling Campaign Kick Off to Oppose Measure 105.  Unite Oregon organized events in Portland and Medford along with our partners, APANO and CAUSA, to show our opposition to a ballot measure that could increase racial profiling in our state.

Yanely Rivas, Unite Oregon's Leadership Development Coordinator, speaks to a crowd of volunteers at the Oppose Measure 105 Campaign Kick Off!

Volunteers can help us spread the word about voting no on Measure 105 (Initiative Petition 22), which seeks to repeal Oregon’s status as a sanctuary state, undoing a 30-year-old law that protects immigrants in Oregon from discrimination. Repealing this law could open the door to racial profiling and families being torn apart, simply because someone is perceived to be an undocumented immigrant.

Together, we can defeat this ballot measure to ensure that Oregon remains a safe and welcoming place for immigrants and refugees. Sign up here for updates.

Alessandra de la Torre and Virginia Camberos of Unite Oregon rally with community members protesting the separation of children from their families.

In June, the Rogue Valley community came together for our "Where are the Children" rally, where they spoke out against the Trump administration's zero-tolerance policy for new immigrants and asylum-seekers. Over 100 community members came out to protest the separation of children from their parents in detention centers.

Since last August, Unite Oregon has been educating, connecting, and organizing immigrant, refugee, people of color and low-income communities residing along the proposed MAX line in the SW Corridor. Our goal is to increase decision-making power in communities affected by the proposed line. We drafted a letter summarizing all of the community recommendations we collected. The letter calls on the local government to build affordable housing, increase tenant protections, expand bus routes, and implement less punitive fines when bus riders are not able to prove they have paid for a ticket, among others.

The letter has been distributed to multiple elected officials and decision- makers, and supported our partners at OPAL Environmental Justice to convince TriMet to develop a low-income fare and create a system for riders to be able to dispute fines. Unite Oregon’s Washington County chapter will continue to organize and educate residents along the SW Corridor so local governments will incorporate the voices of our communities into urban planning projects.

Oregon's Attorney General invited Unite Oregon to be a member of the Task Force on Hate Crimes.  Hate crimes have increased dramatically across the nation over the last 12 months, and some experts allege that Oregon has seen the single largest increase in hate related incidents of any state. The AG’s office created the task force to review existing legal protections for victims of hate crimes and to make proposals in the 2019 legislature for strengthening Oregon’s laws. This work is a continuation of Unite Oregon's successful passage of the 2017 End Profiling Act.

We Are All Oregon

Earlier this month, refugee leaders, faith leaders, immigrants rights organizations and elected officials came together at Unite Oregon to denounce the willful destruction of the U.S. Refugee Resettlement program in response to reports that the Trump administration is likely to limit refugee admissions to 25,000 (a 74% reduction from the historic average refugee admissions ceiling). Since its inception, the administration has launched ongoing attacks on refugee resettlement, from halting refugee admissions as part of his travel ban to nominating the virulently anti-immigrant Ronald Mortensen to lead the Bureau of Population, Refugees and Migration at the State Department.

“Make no mistake: the Trump Administration intends to end refugee resettlement as we know it,” said Unite Oregon Board Chair Manijeh Mehrnoosh, an immigrant from Iran. “If it weren’t for the Refugee Resettlement Program, our friends and neighbors would not be alive today.”

Unite Oregon joined with organizations across the country to demand to Congress and the Trump administration to #Welcome75K refugees in the next fiscal year. To get involved, contact Seemab Hussaini at [email protected]

Taghreed Chaloob, an Iraqi refugee, speaks to the press about her refugee experience. 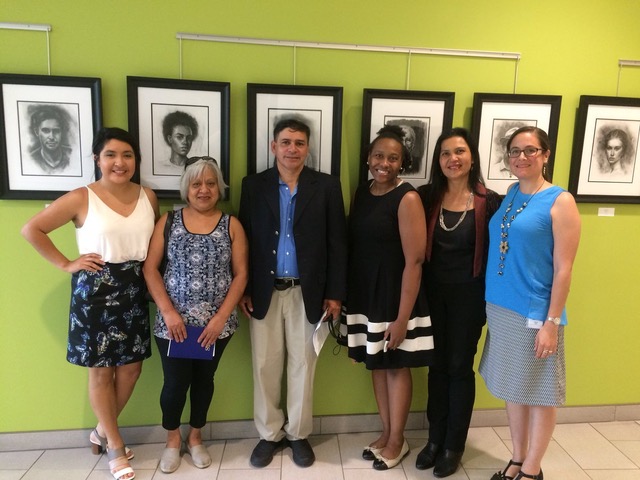 (Above) Yanely Rivas of Unite Oregon and several BOLD graduates at Beaverton City Hall; (Below) PILOT Graduation Celebration at the Portland Mercado!

On July 17th, BOLD 2018 graduates provided testimony to Beaverton City Council, sharing how the annual leadership program has positively impacted their lives and their community involvement.

“I’ve gained an understanding of how the city functions, and became aware of the concepts of diversity, equity, and inclusion,” said Piyawee Ruenjinda. “Because of the BOLD program, I’ve been inspired to work on a project to assist immigrants and refugees.”